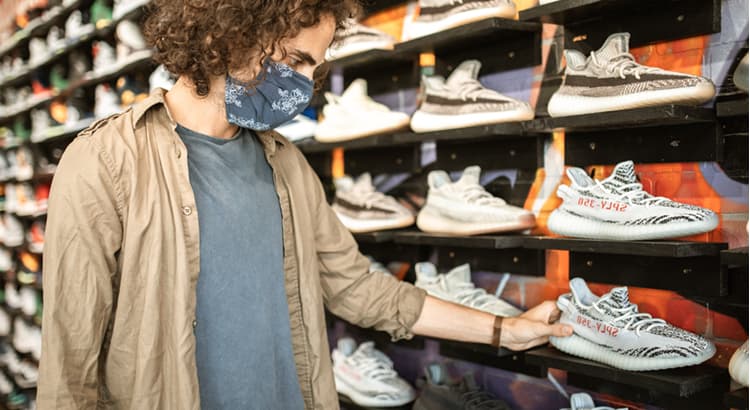 “Every well-known brand in the world has its cheap copies. Adidas doesn’t need any introduction. It is also a massive target for such counterfeit acts. The widespread release of Adidas Yeezy 350 V2 also hasn’t got any exception from these fake copy makers.”

As Yeezy 350 has gained popularity since its release, you might also have bought it somewhere. But now, you might be wondering about its legitimacy. Are you looking for a quick legit check for your Yeezy 350? Well, this article would be a great help in that case.

You may think that a legit check is strict for an obsolete person. But it’s easier than you think. Worry not, because, in this article, we will be covering various ways to ensure that your Yeezy 350 is real or fake. Whether you have already been scammed or want to know beforehand, read along to find out!

1. Scan And Verify The Barcode

Starting off with the most reliable technique in how to spot fake Yeezys?

Simply look at the box in which you received the Yeezy. You will notice some serial numbers. Each pack of Yeezy pairs has its unique barcode. You can scan it on this official app to determine if your Yeezy 350 V2 is real or fake.

If the Yeezy is fake, it will ultimately show no data or track record. But the real ones will display various details such as the colorway and size of the Yeezy 350 V2 you’re testing. But there’s also a possibility that the replicator might put the fake shoes in the official boxes to do a clean job selling the phony copy.

In such a case, you should keep reading to dig into more techniques on how to tell if Yeezy 350 v2 is fake?

2. Spot The Misprints On The Size Tag

Replicators might be clever in making an exact copy as authentic Yeezy 350. But they also produce some apparent mistakes. For instance, you can spot misprints on the size tag; letter-spacing would seem doubled (or triples sometimes).

Other than printing mistakes, the size tag itself will give way. If you observe it, few characters would be too close or too apart on the size tag. That’s a quick sign that the Yeezy 350 is probably fake.

Other ways to spot fake Yeezy boost 350. If you have an unworn pair, their laces are tied and can also give a significant clue. The right shoe will always have the right lace underneath. Moreover, the left shoe will have left lace underneath. In fake ones, the lace situation is also mirrored. The laces of a fake shoe will not follow the lace as mentioned above by the tying theory of Adidas.

No matter how hard scammers work, they will always leave some hook points in their replicas. Observe the sole of your boots properly. Unique about the design of the Yeezy 350 heel has a unique curve. It starts from the middle of the sole and extends towards the upper heel. Fake Adidas Yeezy often has bumpy soles.

You can also detect incorrect stitching on replicas. Adidas Yeezy has different stitching patterns in other areas to make it more unique. But the fake Adidas Yeezy will have the wrong pattern and be loose-knit. This will eventually make the design look off, and you can spot the legitimacy of your pair.

If you observe closely, you can spot the difference in the middle stitching between the toe box and the shoe’s heel. Replicas prefer using thin and light-colored threads, which makes the stitching unnoticeable. The unauthorized pair will also have a flat pattern that can’t be detected unless looked closely.

On the other hand, real Adidas Yeezy 350 V2 is manufactured with thick and bright colored threads. Stitches are perfectly made so that the pattern stands out. Another way on how to spot fake Yeezys. Look closely towards the lining of your pair of Yeezys.

Authentic stitching will be frequent and will not have even a bit of gap in it. Genuine Yeezy lining has very little space in its stitches. Although, the fake lining will have various flaws, such as too much spacing in the sews. The inconsistency of fake ones can easily be noticed if you look carefully.

While investigating the sole, focus on the material and lettering printed on it. Authentic Yeezy will have a high-quality printed Adidas logo on the front side of the insole. After that, examine the Yeezy logo on it. Replicas mostly manage to cheat in these two logos.

Is There Any Difference in the Lettering?

Yes, and it is one of the easiest ways to check authenticity. On the one hand, the pixels on the text will be blurred on the packaging. While on the other hand, the text on the size tag will be much darker. Both of these mean that this is a fake.

Is There Any Difference in the Stitching?

Yes, there is. The actual pair will have a prominent pattern of stitches. While the fake ones will have loose knits and more spaces in stitching.

The Heel of My Pair Doesn’t Have a Prominent Curve. Is that alright?

This is because the original one has a sharp curve that extends from the midsole. Meanwhile, the fake ones will have bumpy heels.

All in all, they’re more than just these five ways we’ve discussed how to spot fake Yeezy? The authentic ones will have a few official accessories in the box. While the fake ones will have extra trinkets with the shoes.

Similarly, the authentic Yeezy will have only Adidas tags on it. Lastly, the counterfeit manufacturers were able to even copy the little details of the stitching pattern.

Cheap replicas keep coming into the market daily. So, we might have to stay extra careful even in the future.